Nelly Alard was awarded THE INTERALLIÉ PRIZE 2013 for her novel "Moment d’un couple".

Florian Zeller, member of the jury, about "Moment d’un couple" :

« An autopsy of a fatal liaison and an exploration of imprisonment, this book is also a vivid depiction of our times (...) Sharp and perceptive, this satire reads like an excellent thriller.” » Sébastien Le Foll, France Culture

« With humor and absolutely surgical precision, Nelly Alard paints the portrait of a couple on the brink of collapse...Our favorite of the season.” » Madame Figaro

« Immersed in a story of adultery transformed into a roman noir. An unexpected success. » Nelly Kaprièlian, Les Inrocks

« One of the most brilliant novels of the season, and a real romantic thriller. Throw yourself into this book. » Gilles Martin-Chauffier, Paris-Match

« Nelly Alard confirms her inimitable style (...), bestowing unexpected density and mystery upon the banality of our existence. » Patrick Williams , Marianne

« Desire, torture, and vengeance, too—living as a couple means taking a risk. A second novel for Nelly Alard, winner of the 2010 prix Nimier, and a confirmation of her incisive talent and scalpel-sharp writing.”. » Stéphanie des Horts, Stiletto

« With intelligence and elegance, the writer reminds us how intolerable it is to love, to no longer love, to doubt one’s feelings, to suffer, and to cause suffering. » Dominique Guiou, Le Figaro Littéraire

« The storyline is simple, the book is impossible to put down. » Mohammed Aissaoui, Atlantico

« Is the story too commonplace ? Certainly not. We bounce from one surprise to another, gripped by the shifting feelings of love. Masterful writing with a touch of humor that is indispensable to the subject. What a wonderful surprise ! » S.M., Marie-France

" A disturbing and intelligent reflection on love today. One of the best novels of the season." Le Journal du Dimanche

"There is nothing sappy about Moment d’un couple : it is a tragic story imbued with undeniable resonance by Nelly Alard’s powerful and masterful language. France may very well fall in love with Juliette : find out August 29th when the book appears in stores.” " A-LIRE.info

« An actress and screenwriter, Nelly Alard made a strong impression with her first novel, Le crieur de nuit (Gallimard 2010, also in Folio). Now she has returned with a book more ambitious and accomplished still, Moment d’un couple, (...) With rare precision and masterful technique, Moment d’un couple is one of the high points of the French literary season.” » Alexandre Fillon, Livres Hebdo

Nelly Alard’s second novel, Moment d’un couple , winner of the Interallié Prize 2013, has been translated and released in the United States by Other Press under the title Couple Mechanics . 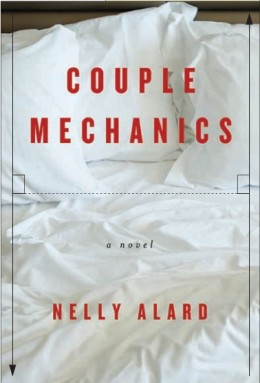 "An elegant and gripping tale about a marriage on the rocks." —The Economist

"This novel packs a surprising emotional wallop, raising questions about the natures of passion and marriage within the context of early-21st-century French politics." - Kirkus Reviews

“It’s hard to imagine how a 300 page book about a couple struggling to save their marriage could be appealing ; but Alard has turned it into an absorbing, suspenseful drama that’s nearly impossible to put down. Couple Mechanics is one of the finest masterpieces of feminist fiction the 21st century has yet produced.” - Pop Matters